The Greatness That Is Jose Mourinho 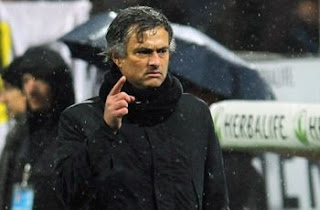 After what could only be described as an absolute cracker of a game I did some reflection on the greatness that is Jose Mourinho the most loved and hated manager around. People love or hate this man because of his arrogance, I fall in the category of the former. In a game where Inter where decimated by injury and losing their top striker (Eto’o) to the African Cup of Nations, Jose’s brilliance and influence shown through. Mourinho switched the formation a bit to 4231 where as most of the season they play a 4312.

The team was set up to work around Mourinho’s summer signing Wesley Sneijder and in the attacking half this worked well, with him setting up and scoring himself in the first half. Defensively they were a bit suspect and conceded twice in the first half

In the second half the brilliance of Jose started to show with his substitution of two players (Quaresma and Stankovic off for Samuel and Arnautovic). This is one of my favorite things about Mourinho is his willingness to change whenever he feels it’s not working. In a tie game at half time what other manager would use two of his substitutions at halftime?!

In the 67 min Siena scores again and the game seems to be destined for a loss (the first at the San Siro they would have had in 36 games) and Jose’s FIRST HOME LOSS IN 8 YEARS! “At 3-2 I was pondering my first home defeat in eight years against [Alberto] Malesani’s Siena, and I thought at least it will come against a coach I like.” – Jose Mourinho taken from goal.com

In the 88th minute when Sneijder blasts a low free kick in off of the post to his right the goalie’s left. Now this is where I really relate and learn from Mr. Mourinho…as opposed to celebrating a last gasp draw he angrily tells his players to stop celebrating and that their job is not to draw but to win…and win they do substitute Walter Samuel scores in the 94 minute to win. What a game, what a manager.