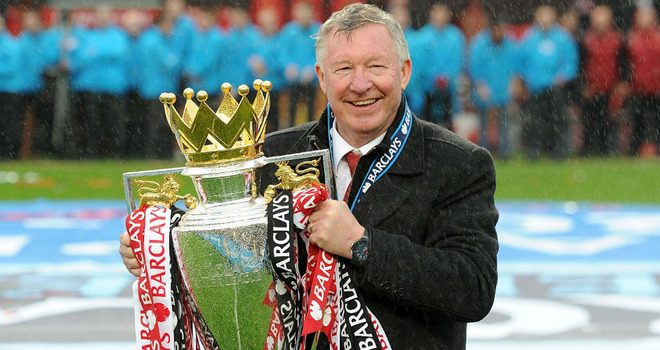 brilliant piece from Sky Sports about one of the greatest managers ever…yes that’s high praise from an unashamed Liverpool FC supporter!

Sir Alex Ferguson has unveiled his managerial blueprint – whilst admitting the conditions that allowed him to be so successful at Manchester United are unlikely ever to be replicated.

Over a series of interviews with Harvard Business School professor Anita Elberse in 2012, Ferguson went into detail about what he believed to be the key elements of his job.

This is an edited version of his theories, which appear in full in the October edition of the Harvard Business Review.

1. Start with the foundation
“From the moment I got to Manchester United, I thought of only one thing: building a football club. I wanted to build right from the bottom. The first thought of 99% of newly appointed managers is to make sure they win – to survive. They bring experienced players in. At some clubs, you need only to lose three games in a row, and you’re fired. In today’s football world, with a new breed of directors and owners, I am not sure any club would have the patience to wait for a manager to build a team over a four-year period. Winning a game is only a short-term gain – you can lose the next game. Building a club brings stability and consistency.”

2. Dare to rebuild your team

“We identified three levels of players: 30 and older, 23 to 30, and the younger ones. The idea was that the younger players were developing and would meet the standards the older ones had set. I believe that the cycle of a successful team lasts maybe four years, and then some change is needed. So we tried to visualise the team three or four years ahead and make decisions accordingly. Because I was at United for such a long time, I could afford to plan ahead. I was very fortunate in that respect. The hardest thing is to let go of a player who has been a great guy – but all the evidence is on the field.”

3. Set high standards – and hold everyone to them

“Everything we did was about maintaining the standards we had set as a football club – this applied to all my team building, my team preparation, motivational talks, and tactical talks. I had to lift players’ expectations. They should never give in. I said to them all the time: ‘If you give in once, you’ll give in twice.’ I used to be the first to arrive in the morning. In my later years, a lot of my staff members would already be there when I got in at 7am.

“I expected even more from the star players. Superstars with egos are not the problem some people may think. They need to be winners, because that massages their egos, so they will do what it takes to win. I used to see Ronaldo, Beckham, Giggs, Scholes, and practising for hours. They realised that being a Manchester United player is not an easy job.”

“If the day came that the manager of Manchester United was controlled by the players – if the players decided how the training should be, what days they should have off, what the discipline should be, and what the tactics should be – then Manchester United would not be the Manchester United we know. I wasn’t going to allow anyone to be stronger than I was. Your personality has to be bigger than theirs. There are occasions when you have to ask yourself whether certain players are affecting the dressing room atmosphere, the performance of the team, and your control of the players and staff. If they are, you have to cut the cord. There is absolutely no other way. It doesn’t matter if the person is the best player in the world. Some English clubs have changed managers so many times that it creates power for the players in the dressing room. That is very dangerous. If the coach has no control, he will not last.”

5. Match the message to the moment

“No one likes to be criticised. Most respond to encouragement. For any human being – there is nothing better than hearing ‘Well done’. Those are the two best words ever invented. At the same time you need to point out mistakes when players don’t meet expectations. That is when reprimands are important. I would do it right after the game. I wouldn’t wait until Monday, and then it was finished. My pre-game talks were about our expectations, the players’ belief in themselves, and their trust in one another. In half-time talks, you have maybe eight minutes to deliver your message, so it is vital to use the time well. Everything is easier when you are winning. When you are losing, you have to make an impact. Fear has to come into it. But you can be too hard; if players are fearful all the time, they won’t perform well. You play different roles at different times. Sometimes you have to be a doctor, or a teacher, or a father.”

“Winning is in my nature. There is no other option for me. Even if five of the most important players were injured, I expected to win. I am a risk taker and you can see that in how we played in the late stages of matches. If we were still down with 15 minutes to go, I was ready to take more risks. I was perfectly happy to lose 3-1 if it meant we’d given ourselves a good chance to draw or win. So in those last 15 minutes, we’d go for it. We’d put in an extra attacking player and worry less about defence. We knew that if we ended up winning 3-2, it would be a fantastic feeling. And if we lost 3-1, we’d been losing anyway. All my teams had perseverance – they never gave in. It’s a fantastic characteristic to have.”

7. Rely on the power of observation

“Observation is the final part of my management structure. One afternoon at Aberdeen I had a conversation with my assistant manager and another coach who pointed out I could benefit from not always having to lead the training. At first I said no but deep down I knew he was right. So I delegated training. It was the best thing I ever did. It didn’t take away my control. My presence and ability to supervise were always there, and what you can pick up by watching is incredibly valuable. Seeing a change in a player’s habits or a sudden dip in his enthusiasm allowed me to go further with him. Sometimes I could even tell that a player was injured when he thought he was fine.”

“When I started, there were no agents, and although games were televised, the media did not elevate players to the level of film stars and constantly look for new stories about them. Stadiums have improved, pitches are in perfect condition now, and sports science has a strong influence on how we prepare for the season. Owners from Russia, the Middle East, and other regions have poured a lot of money into the game and are putting pressure on managers. And players have led more – sheltered – lives, so they are much more fragile than players were 25 years ago.”