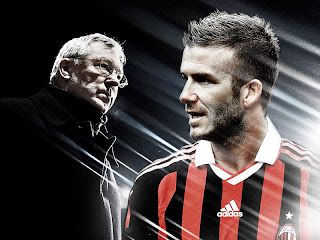 Manchester United v AC Milan 1:30 central Fox Soccer Channel
Today Goldenballs (David Beckham) returns to Old Trafford to try and overturn a 3-2 defeat against his old club Manchester United. Although all English eyes will be on David anyone with real knowledge of the game will be watching Ronaldinho (who has had a hand in 24 of Milan’s 42 goals this season) and Rooney who has never been in better form and scored two of the three in Milan. This should be an excellent game as Milan have to attack and I have never really known United to sit back.

Real Madrid v Lyon 4:00 central on FSC
The roller coaster first season of big spenders Real Madrid is really starting to reach the heights they should on a much more consistent basis. Although Lyon is a tough opponent, I really see Madrid overturning the 1-0 loss in Lyon. There is amazing talent in this game that will be display with arguably two of the worlds best in Ronaldo and Kaka.