Messi and Barca 4-1 over Arsenal 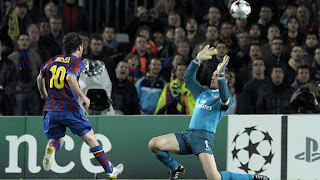 What do yo do when you go down 1-0 at home…how about score a hat trick in 21 minutes directly after that goal and then add a fourth at the end of the game. You know, just cause why not? I was completely in awe of what I watched yesterday from barcelona but mainly Messi, as soon as I saw him get the ball for his second I just started laughing because not only was there only going to be one outcome for the ball (it was going in the goal) but one outcome for the game. Messi and Barca just simply refuse to lose. As I saw him break for his third (and what a third it was!!!) I couldn’t help but think I may just be watching THE best to ever play so I got down on my knees and half sarcastically half serious praised him.

All you young amateur footballers take note, hard work and dedication will take you wherever you want to go but to do those 2 things with passion and joy make you the complete package. This is what at first made me admire Messi but now I have fallen in love with him *no homo* To do what he did in any game would be massively impressive but to do it against Arsenal in the Champions League Quarter final is just otherworldly. I guess in summary I really just want to say from myself and all lovers of the beautiful game…Messi, thank you.