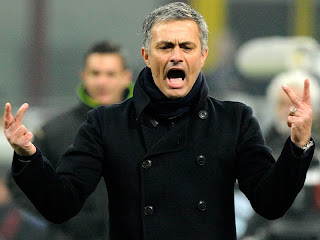 I would like to recap the Milan derby where shortly into the game I was lifted off of my seat twice by the electrifying Wesley Sneijder only to see him sent off for sarcastically applauding the referee. needless to say I wasn’t the happiest person and may have yelled not so nice things at the tv. The referee gave what could only be described as a terrible performance in the first half. He single handedly stopped Ronaldinho after he beat three defenders the referee got in his way and then 3 minutes later got in Sneijder’s way as he was about to receive the ball at the top of the box. Im pretty sure that is what led to Wesley’s attitude and his shortly after that sending off. Right before that sending off on a counter attack Goran Pandev sent a fantastic no look pass to Diego Milito who did what he does best…score. When the sending off occured I thought the game was ruined but boy was I wrong. Jose Mourinho’s genius and team spirit was quite evident and not only did they keep the 1 goal lead they had but built on it with a well taken free kick late in the second half by January signing Goran Pandev. The referee tried but he couldn’t stop the game being brilliant.