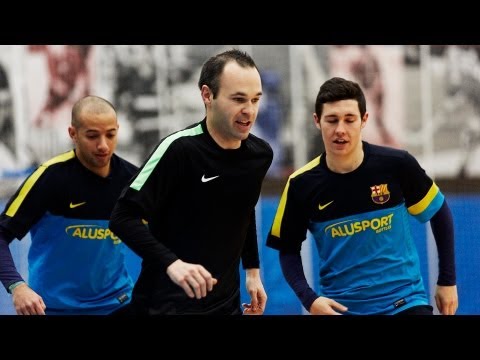 For Nike’s new futsal shoe line they have new advertisements. THis is a video of one of the world’s top 5 soccer players for those of you who don’t know who he is. Not only is he a great player but is completely reinforcing why futsal is the best form of indoor soccer!

The Original Winger (www.theoriginalwinger.com) via Nike
As a young player growing up in Fuentealbilla, south of Spain, Andres Iniesta had dreams of making it to the professional ranks of football. Part of his schooling involved playing small-sided football with his friends in his hometown. It was a formative part of his footballing education that benefits his game to this day.

“Futsal helps my ball control in tighter spaces” says Iniesta. For that reason, when his schedule allows it, Iniesta joins training sessions with the Barca Alusport Team (FCB’s futsal equivalent). “If I had more free time, I would like to train more with my colleagues on the futsal team.”

Nike Football’s “My Ground” film gives a glimpse into Iniesta’s time training with his futsal colleagues and his background in the small-sided game.