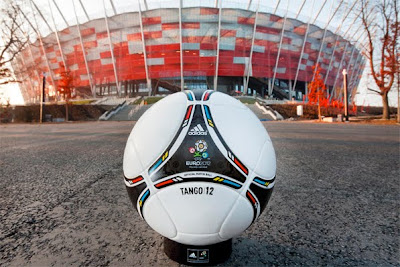 Based on the classic Tango design used during both the FIFA World Cup(tm) and UEFA EURO(tm) tournaments during the early 1980s, the adidas Tango 12 features a modern interpretation of the design including a coloured outline inspired by the flags of the two host nations – Poland and Ukraine. Etched into the Tango design are three bespoke graphics which celebrate the decorative art of paper cutting, a tradition in the rural areas of both host countries and link to the key characteristics of football – unity, rivalry and passion.

“The adidas Tango 12 is based on an iconic design which is known by players and football fans throughout the world, and it is great to see the design reinterpreted in such a creative fashion for the UEFA EURO 2012 tournament,” commented David Taylor, CEO of UEFA Events SA.

Complementing the design, the adidas Tango 12 features a series of triangular panels that are thermally bonded together to ensure a true, stable flight path. Covering each panel of the ball is a grip texture which supports boot to ball contact and enhances ball control. Beneath the outer surface of the ball lies a woven carcass and a new bladder for increased air retention and reduced water uptake.

The adidas Tango 12, which has been developed over a two-year period, underwent two rigorous types of testing – qualitative player testing, which was conducted across eight different countries, using players, federations and clubs from both elite and grass roots football, and quantitative lab testing, which concluded that the adidas Tango 12 meets and exceeds all FIFA Approved Standards for an Official Match Ball making it the most tested ball adidas has ever produced.

adidas Group CEO Herbert Hainer commented: “The adidas Tango 12 is a combination of many years of football tradition coupled with extensive player and lab testing to make it the most tested ball adidas has ever produced.”

The adidas Tango 12 is the eleventh Official Match Ball produced for the UEFA EURO(tm) tournament leading on from a rich history in adidas football development which started in 1963. During that period, three Tango inspired designs have been produced for the UEFA EURO(tm) tournaments – the 1980 Tango River Plate, the 1984 Tango Mundial and the 1988 Tango Europa – making the adidas Tango 12 the fourth in its history.

The adidas Tango 12 will be used on field during the UEFA EURO 2012(tm) which kicks off on June 8th when tournament hosts Poland take to the field at The National Stadium Warsaw. All competing federations will receive an allocation of thirty Official Match Balls during the week commencing December 5th, six months ahead of the tournament, for training and competitive use. The adidas Tango 12 is available for purchase in adidas retail outlets and associated stockists as of December 3rd.