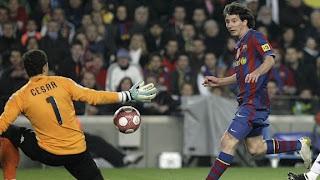 Without Zlatan and Guardiola, Im sure Valencia wish one more Barcelona player was missing…Messi. He scored his second and third almost back to back. TV’s were still showing the replay of his second and cut immediately to him on another break which resulted in the same, another goal. The first half of this game was like watching paint dry, second half when Henry came on Barca came alive and looked reminiscent of last year. Well done boys now do it against Stuttgart midweek.