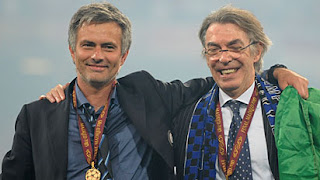 An agreement, reported to be worth €8 million, has been reached after Real president Florentino Perez and Inter president Massimo Moratti met in Milan. Jose will be revealed to Madrid public on Monday… and the rest of the world’s clubs quickly proceed to running and hiding. Ok maybe not Barca but everyone else. This year’s La Liga is going to be epic!