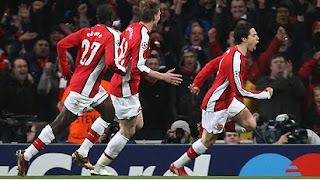 Arsenal (without Cesc Fabregas) went completely balls to the wall and ran over FC Porto like Wayne Rooney playing against a 5 year old. The much maligned (not be me) Nicklas Bendtner had a hat trick with Nasri and Eboue adding one each. Bayern Munich came back in a match I swore they were done in and I was all but ready to throw in the towel for them…good thing Im not Luis Van Gaal. Van Bommel and a blast from Robben brought them to 3-2 on the night making the tie 4-4 and Bayern through on away goals.